Before the election there was a lot of fuss about Conservative co-chair Grant Shapps.

Did he deny having a second job? Did he change wikipedia entries about himself? And who the heck is Michael Green?

Whatever was true or not – and that picture is so complicated I’m still not sure – it seemed like Grant Shapps was to be viewed with scepticism.

And then I remembered something.

Back in 2011 Shapps told the Welwyn Hatfield Times that he was involved in a car crash in Kansas in 1989. The crash was so bad he was in a coma for a week, and spent time recovering in a Ronald McDonald house.

The story Shapps weaved about the accident is detailed. He names the town, WaKeeney, and details of his companions.

I was convinced that a crash really had taken place. But I was suspicious of the coma and the recovery. A week is a long time in a coma, and aren’t Ronald McDonald houses for kids?

Plus, I thought, why take his word for it? Why not just check?

Helpfully I used to live in Missouri, a bordering state to Kansas. And I attended classes at the journalism school, meaning I knew one or two contacts who I figured could point me in the right direction of helpful public records.

I was right. A few clicks of a keyboard later, and I was emailing the Trego County Historical Association. They kindly trawled their local papers from August 1989 looking for details of a crash on the interstate. (I worked out rough dates for the accident as Shapps said he flew home on his birthday – September 14).

A day later and I received this in my inbox: 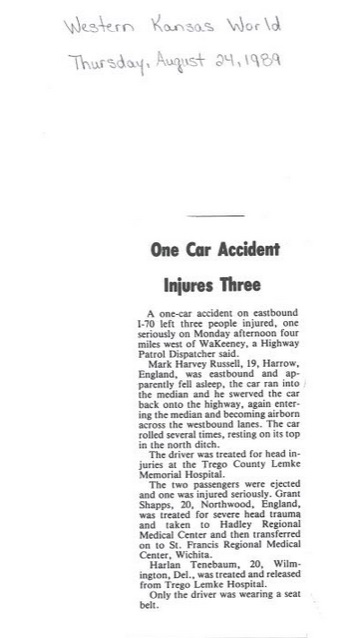 The story checks out!

Admittedly, there is no mention of a coma – but severe head trauma is close enough. AND the dates work. A week in a coma and roughly a fortnight in McDonald’s house (which is how long he claimed) takes you to Shapps’ birthday.

Only one thing bothered me still. Ronald McDonald houses are for children and Shapps went home on his 21st birthday. How could this be? But a quick check of the website run by RM house in Wichita, Kansas reveals that they look after anyone up to the age of 21. Three weeks from his birthday, 20 year-old Shapps just scraped in.

So, there it was.

Whatever else may or may not be true about Mr Shapps we know his claim of a head-whomping in Kansas is true and we also know that if you’re a politician, and you are going to lie about being in accident, it’s probably best that you don’t pick a midwestern US state as its location. Trego County Historical Association has my back.