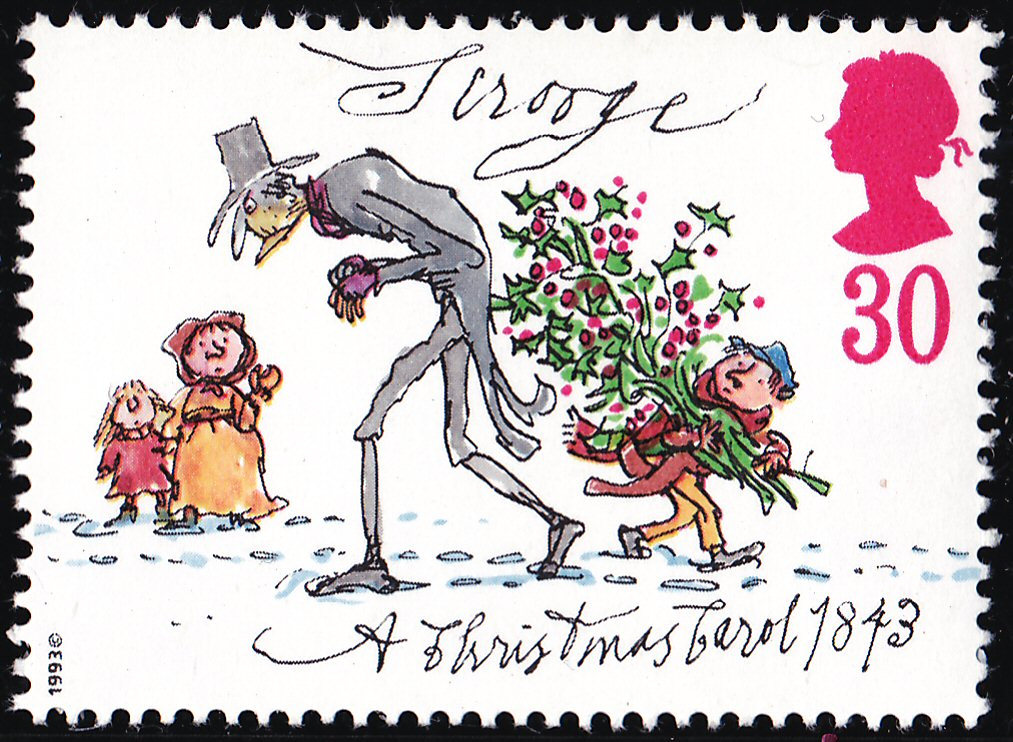 Amazon ran a competition to re-invent A Christmas Carol as a 1,000-word children’s story. For fun, during a tube journey, I decided to write  an entry on my phone. What fell out has a difficult message, and made me cry on the tube, and I didn’t win. But I sort of love it anyway.

So here it is. Merry Christmas, every one!

Headmaster Gerald Fezziwig glared across the cold, dark dining room of Grays Boarding School. His children, Tim and Jessica, were passing something under the table instead of finishing their spelling test.

“Freeze!” yelled Gerald, marching towards them, hands locked behind his back.

Tim reached out a trembling palm. In it was a crumpled Christmas present, wrapped in glittery paper.

“Children,” he asked in a menacing tone, “what do I learn from a present?”

Jessica shrank in her seat. “Nothing, daddy. We just thought it might make you happy.”

“Happy?” said Mr Fezziwig with surprise. “What use is happiness? The best children know that how you feel isn’t important. What matters is in your head. What do I always tell you Timothy?”

“Exactly!” said Mr Fezziwig. “And because I love you so much, we will spend tomorrow doing multiplication tests.”

Later, as Mr Fezziwig sat in his cold, dark study, he looked at the crumpled present and frowned, before tossing it into the bin.

His eyelids became heavy and he fell into a deep sleep. Until a noise shattered his snoring.

Mr Fezziwig’s heartbeat grew rapid. “Stop this at once,” he shouted, “who’s there?”

“WooooooOOO… hee hee hee,” the ghostly voice cracked into a peal of laughter.

In the dark, Mr Fezziwig’s furious face changed. Suddenly he was soft, and quiet.

A figure glowing with light stepped from behind the Christmas tree. It was Nora: his first love, his only love.

“Oh Nora,” he said, running towards her. But her radiant body was untouchable.

“Shhhh….” she said, translucent eyes shimmering. “We must go!”

She clicked her fingers and the room faded. A scent of mince pies filled the hallway in which they now crouched, looking into a brightly-lit kitchen, bursting with toys, hams, and cakes.

A tinier Tim and Jessica sat at the table. Jessica was throwing her Christmas pudding across the room, while Tim rubbed some into his face, making her squeal.

“There’s me!” said Mr Fezziwig, catching a glimpse of his past self. A tall, young Fezziwig smiled and twirled Nora across the kitchen to the strains of a brass band playing Christmas carols in the background.

“Without you? Never!” Whisking Jessica from her chair, Mr Fezziwig waltzed her around the kitchen with glee.

“Teach me! Teach me!” said Tim, wriggling from his chair.

“What is there to teach?” Gerald cried. “Feel as you go, Tim. Dance from your heart!”

In the cold hallway, a tear dripped down old Mr Fezziwig’s face. Who was this young man with such hope in his soul?

“Nora, what happened to me?” he asked. But she was gone.

Above him the roof melted away. Rain fell on his head. Mud squidged around his slippered feet, as he realised he was stood in a familiar field.

A wreath of flowers passed by. Two children, dressed in black, stood beside their father. He was holding all his emotions inside so they did not fall out and hit those two little people below.

In the background, from beyond the church door, he could hear the hum of a Christmas tune.

A tearful Jessica looked up: “Daddy, it’s mummy’s favourite song. Should we dance?”

Her father avoided her gaze as he replied: “Not anymore.”

“But we can dance using our hearts, daddy,” said Tim.

In his slippers and robe, the present-day Mr Fezziwig lurched to hug his grieving children, but as he did, the church melted away.

“Why have you left me again, Nora?” Mr Fezziwig cried, “What are you trying to show me?”

Stood once more in the draughty dining hall of Grays Academy, Mr Fezziwig could see Tim at the master’s table. He was older now, a grown-up, but his eyes missing their sparkle. Two children sat before him in the hall, writing furiously with one hand and passing a crumpled-up gift with the other.

“Father, what is Christmas?” the small boy asked.

“It is something for other people,” said the no-longer tiny Tim.

Tim took the gift and looked at it, long and hard. After a moment, he opened the glittery paper and pulled out its contents. It was a tiny porcelain figure of a man and woman dancing.

“Of course this isn’t for you! Happiness is fleeting, but learning lasts forever. All good children know that. Carry on with your test,” he snapped.

Mr Fezziwig knew, at last, what Nora was trying to show him.

It was early morning at Greys Boarding Academy when Jessica and Tim dragged themselves to the dining hall. Their father waited with a stopwatch.

“Today, we are going to have a test,” announced Mr Fezziwig.

The pair sighed and waited for their papers.

Instead, their father held out a Christmas Pudding.

“First task! Who can rub the most pudding into their face in one minute?”

“Really!” beamed Mr Fezziwig. “And then,” he said, pulling out a large turkey and presents wrapped in glittery paper, “we are going to cook lunch, play pass the parcel, and…” his voice trailed off as he brought out a music player and pressed the button, springing forth a rambunctious melody of brass bands. “And… we are going to dance. We are going to spend lots of time dancing. We are going to dance from our arms and our legs and, most of all, our hearts.”

The Fezziwig children sat, open-mouthed. In his heart Gerald finally felt something. It wasn’t learning. It was happiness.

2 thoughts on “A Christmas Carol: The Exam”