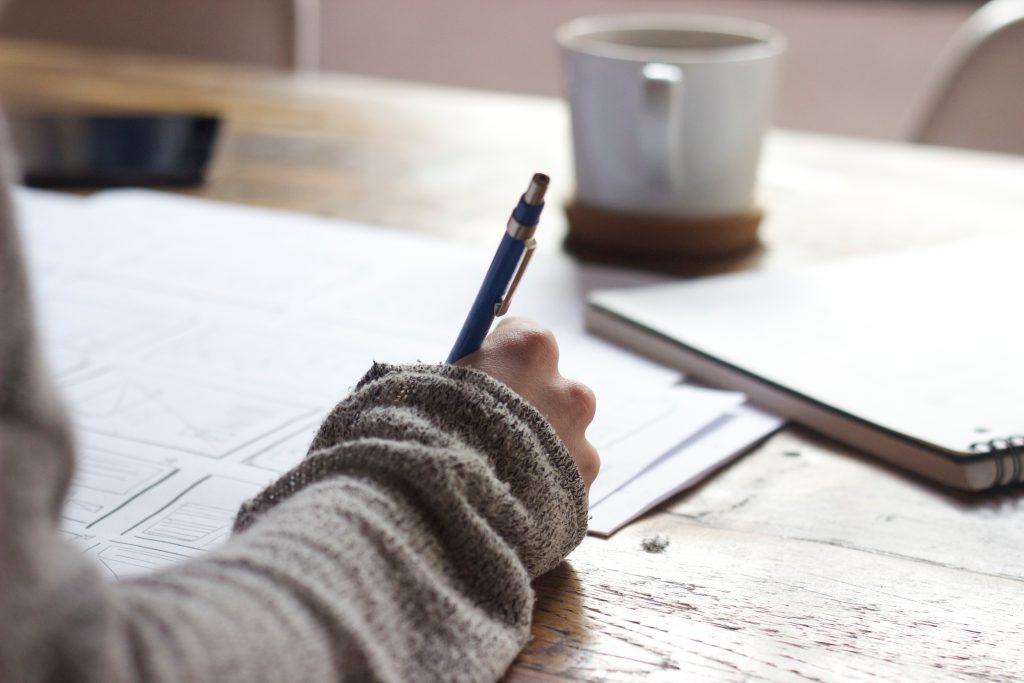 She was my form tutor in year 9 and 10, and the only woman who taught me anything about how to break a wild class. She had poker straight hair, and huge glasses, and always wore a burnt orange jacket that she would only take off if it was 53 degrees and even then we still had to ask before we could take our blazer off.

I hated Miss Watson. And loved her. Because that’s how it is when you’re a teenager. The teachers who spend all their time moaning at you for your own good are often those you come to love most.

My typical crime at school was listening to my walkman. Miss Watson hated it and would steal my earphones if I refused to put it away.

Plus I was forever in the wrong queue. Miss Watson would make us line up outside her class on either side of the door. Boys on the left. Girls on the right. I would queue with the boys every time. If boys went in first, I would hang near the end, and she’d make me swap over when I got to the front. If the girls went in first it was a victory. I’d swan in last, with all the boys, to make my point. Miss Watson was smart enough to know this victory made me feel good. And I was dumb enough to believe I’d gotten away with something.

It was autumn 1996 when I first met her. Our form arrived in the stark blocky room of 9C. Unlike other form groups, whose letter reflected their tutors’ surname, we were exotically named after Miss Watson’s first name, Carole. Yup, with an ‘e’.

Our form group was not pleasant. We had decimated tutors over the year and become known as the ‘nasty’ form. Later, when I taught in London, I met the karmic reincarnation of our 9C selves in 9MO.  It was only then I realised how horrific we had been and felt terrible for every teacher we made flee from our classroom in tears.

Miss Watson was never going to cry. She basically told us as much when we arrived.

Her thick Wigan (Wig-uhn) accent clipply told us that she had heard how awful we were, and that we were going to stop it. Now.

She was about 4 feet 10 tall and blind as a bat. We were terrified anyway.

In one of our first form meetings she whipped out a record player and played ‘Bohemian Rhapsody’ to us. After the song she told us about how, at university, when the world felt a dark place, the  person she could rely on was Freddie Mercury. With the few pennies she had, she’d bought enormous headphones and spent days at university lying on her bed, listening to his voice. She hoped we all had Freddie Mercury’s who helped make our lives better. And she wanted to hear about them. Each of us was going to have to make a speech, just for a few minutes, over the next few weeks, about a thing we really liked.

We were flummoxed. And a bit outraged. What was this bullshit? We were used to swinging on chairs, and throwing things at each other, and boys pinging girls’ bras, and reading David Hughes’ copy of the Daily Star which he got from some builders on the train to school each morning. Reading speeches to each other sounded rubbish.

It was and it wasn’t. I don’t remember many of them, really. They probably weren’t very good. But I remember being amazed that we did it anyway. We actually listened. We didn’t shout, or throw things. We snoozed a bit. But we were placid. A definite break-through.

I don’t remember making my speech at all but I know it was about Terry Pratchett. A few weeks later Miss Watson gave me a page of the Sunday Times magazine featuring an interview with him. It was the kindest thing a teacher ever did for me. I’d never seen the Sunday Times. I didn’t know authors gave interviews. I kept marvelling at how she could have thought of me, on a Sunday, when she wasn’t at work. And I wondered what sort of human being does that? Who bothers to pull a page out of a newspaper, and put it in their bag, and carry it to work, and get it out at the right time and say “I saw this and thought of you”. I remember thinking, right then, that I wanted to be that sort of human being.

Years later, in my own classroom, I was forever doing the same thing. Giving pupils books that I thought they might like once I was finished. Passing them magazine articles; sharing music of bands they loved.

I still have the Terry Pratchett article, too. It’s in a small memory box I keep of the most important things from my teenage years. It’s a permanent homage to Carole-with-an-e.

More amazing, perhaps, than Miss Watson’s form tutoring was being in her French class. Here, she was Madame Watson. Not Miss. Never Miss. And never Laura, for me, but always Laure. In fact, she diligently called us all by our French names: James was Jean-Jacques, Clare became Severine, David … Daaarveeed.

I hated learning French. I still hate it. Languages are my Achilles heel. I don’t care for them, they make me uncomfortable, every time I utter a foreign phrase I feel like a hippopotamus trying to pirouette.

The amazing thing is that Miss Watson didn’t solve that. She just taught me anyway.  She taught me that a truly great teacher doesn’t make you love a subject. She just gets you an A* whether you liked it or not.

Ten years after I started in that blocky form room, I had my own form and subject classes. My classroom emulated everything I had learned from Miss Watson. Clear instructions on the board, rigorous routines for starting the lesson, constantly asking questions, giving resources out, ending the lesson in a clear and consistent way. I stole her clippy matter-of-fact way of speaking, and the way she always did fun games at the end of lessons and vocab tests at the start. And I wore jackets. Lots of them.

I gradually came to see how she had got our form on side. After those initial speeches, she broke us into teams. We were selected each half-term by raffle and the groups competed against each other for points in mini-quiz activities. My favourite was the A-Z game, where we wrote all the letters of the alphabet on a piece of paper, and then had to complete a word for each letter based on a theme. The team who could complete the most letters won.

Topcs included chocolate bars, car manufacturers, capital cities. Cries of “Rome? Is Rome a capital city? It’s got a football team…” would fill the air. And instead of 30 pupils battling the teacher – our prior modus operandi – there would be 5 groups each trying to work together and outpit each other.

Somehow she would mark the papers by breaktime and we’d pile into her room to see who had the glory. (I look back now and presume she had a free period, but to us it was magical). She would take the moment to check our ties, shirts, blazers, the walkman. It was only as an adult I realised she made several points in the day when she would see us (she would let us eat lunch in her room for the first 15 minutes of our break, for example) – not just because she was “cool”, as we thought, but because she wanted to reinforce her expectations for us, and also be there in case we needed her.

When I was 15 and split up with a dear boyfriend, (young love is intense, isn’t it?), I went to school 20 minutes early and put all the chairs down in our form room and flopped on a chair and sobbed in the corner. And all she said was “you’ll be okay, Laure” and she made me help her put some worksheets out. It was exactly what I needed.

The high-point of Miss Watson, however, was The Day of the Nail Varnish Incident. It is the story I have told most often to new teachers I have trained about behaviour.

The Nail Varnish Incident began like every other autumn term blustery morning. We piled into our form room: shirts had to be tucked, trainers changed to shoes, walkman taken from me again. Grr.

And, as was the ritual every morning, Emma had arrived wearing nail varnish. Loud, red, luscious nail varnish. Which Emma lovingly painted on her fingers almost every night and which, for weeks on end, Miss Watson had required her to remove each morning.

The routine never changed. Miss Watson would go into her stock cupboard, produce a bottle of nail varnish remover and plonk it on Emma’s desk along with a series of cotton wool balls. The removal would begin.

Only this day, there was a problem.

Two minutes into the cleaning Emma thrust the bottle onto the desk with force. Her eyes gleamed, her mouth smiling, her tone defiant. She announced: “It’s empty”. And leaned back in her chair.

For a moment we froze. For the first time it was possible: one of us might win.

That possibility was tantalising. But incredibly short.

In one swift move Miss Watson strolled from her desk, swiped the bottle with one hand, spun, threw it in the bin, caught the stock cupboard handle, swung it open, grabbed a second full varnish remover bottle, spun again and placed it in front of Emma. She slinked  back at her desk before the stock cupboard had even closed.

Emma never wore nail varnish again after that. And I learned that persistence is about 90 per cent of achievement when it comes to improving teen behaviour.

Someone asked recently if a teacher had changed my life. I’m not sure that Miss Watson did anything that changed my route through it. My french grade never mattered. I didn’t become a teacher because of her. No major change in my circumstances occurred because I was in 9C.

But I do think Miss Watson changed me as a person. She modelled a whole new type of human. Determined, smart, curious, fierce. But always, always intentional and kind.

After twenty years, I am glad I finally get to say a proper thank you.

8 thoughts on “A Love Letter To Miss Watson”