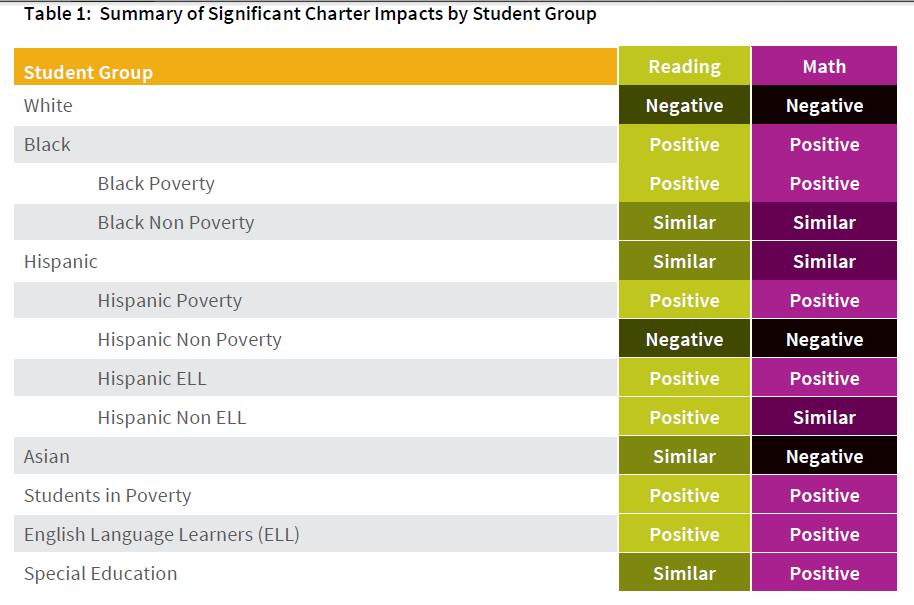 This is Figure 1 from the 2013 CREDO Study Executive Summary. Get used to seeing it. I suspect it will soon become a new classic reference in education debate.

By matching every student in a Charter School with a similar student in a nearby school, CREDO aims to see if there is a difference to reading and maths scores depending on the type of school a student attends.

If you read all the Parliamentary debates about Free Schools in the UK & New Zealand (as I did) you soon realise the enormous power of the Stanford CREDO studies. The 2009 CREDO was the most referenced study in the debates and not just by free school advocates – it is referenced by everyone.

The reason why both sides like CREDO is that it presents a mixed picture, manipulable to fit one’s long-held views. Back in 2009 CREDO showed that about a 1/3 of Charter schools were doing brilliantly, and about a 1/3 not so brilliantly. Advocates for the policy talked, constantly, about the first statistic; its opponents carped on about the latter.  (For a great read about such behaviour, I heartily recommend Henig’s “Spin Cycle” which forensically examines education stakeholder’s preference for point-scoring over proper debate).

From what I’ve read of the study so far, this 2013 study also presents a mixed picture. Students from groups who have traditionally received less good schooling and have been ‘underperformers’ look to be doing better in the new charters when compared to their “twin” in a traditional public school. This picture differs dependent on state, and dependent on the company running the school the student is in.

No doubt much commentary will start to pull these issues out. Until then, Figure 1 is likely to be the hit home message.