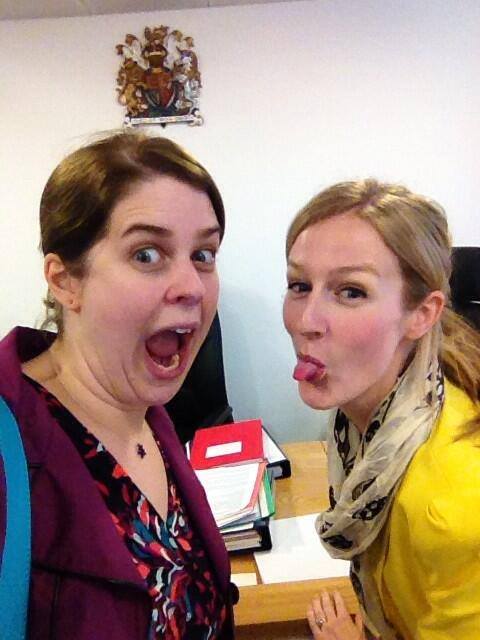 FOI selfie with Helen Lewis (my official ‘court friend’). It was the end of the day. And yes, we asked before we took it. I AM NOT VEXATIOUS.

So, the results are in on the Information Tribunal. And… I lost. Frustrating and upsetting as it is, it’s what the judge on the day found and so I have to accept that a blanket ask for free school applications and the decision letters has been ruled out.

A number of things have been annoying about the process but to save me endlessly banging on about it, I wrote about it for my latest Guardian column and I don’t plan to write much more about the day (at least for a little while). I do, however, want to finish my advice blogs on FOI which I started in May – so those will be upcoming soon.

One thing: if you read the column you will see the good news about the Tribunal, which is that the judgement says if I had been asking for a single form I would have been given it. Theoretically, if individuals apply for a single piece of information about free schools this suggests they would get it. Many thoughtful people have asked if they could put a request in for me and then pass it on so that I could get a complete set. Doing this, however, might also be ruled as ‘vexatious’. This is because the judge has decided that the DfE doesn’t have the resources to redact all the forms – and that will be true whether it is for my one request or for a dripfed multitude of them. Too many, and no doubt they will argue it is too burdensome to respond. Also, requests can be ruled vexatious if they are being done to ‘harass’ an authority into compliance. So if people were requesting simply to get back at the DfE that would be problematic too.

This leads to the Kafkaesque situation where the judge says I am vexatious for asking for too many things at once, but I wouldn’t have been ruled to be vexations if I ask for one form. But if individuals then coalesced to apply for all the forms, that too will be vexatious.  Still, this is the law. So while I don’t want to (in fact, I can’t) tell people not to exercise their right to ask for information under the FOI Act, I am not wanting to start any sort of campaign. As it stands, I don’t plan to ask again for any free school applications from those cohorts.

On the letters, however, I do think there is a good case for their release. And I have asked the government to look at whether they might be released without the application forms.

In brighter news, my return to the UK has been sealed by my getting a job. As announced last Monday I will be starting as Deputy Editor at Academies Week, a new weekly newspaper aimed at people who are interested in schools’ related policies and finance. Ultimately I believe that education policies work best when people are informed about them and when an impartial eye is cast over the whole thing. While I understand that autonomy and less ‘oversight’ allows innovation, it can also allow corruption – at Academies Week one of the things I’m excited about doing is pointing out both these things: the good and the bad.

The PhD is therefore being transferred back to the UK. Though it will take a bit longer to complete, I still hope to do so at some point – even if it is without those pesky free school application forms!