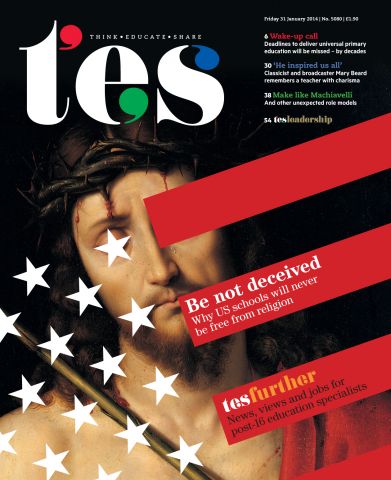 Last Friday, the TES published my longest US feature yet: “The Godless Delusion”. The piece muses on the fact that American schools are most definitely not allowed to involve religion. Perversely, school leaders spend waaay longer than necessary worrying about it.

Many of the case studies described in the piece were raised in an ethics class I took last semester here at the University of Missouri. It’s amazing the cultural differences in such things. During one class we read a case study about a 17 year old student who was strip searched by the school principal and his assistant. The student had been watched for a few days due to an “unusual bulge” in his trousers (the case studies words, not mine). At the end of the school day he was therefore prevented from getting on to the school bus and instead escorted to the principal’s office. The principal called the student’s mother to ask permission for a pat-down. She refused. The principal therefore escorted the student to the changing room, where he locked the door (apparently for the students’ privacy) and then instructed the pupil take off all his clothes, in full view of both male staff members, before putting on his sports kit.

The lecturer stopped at the end of the case study: “Who felt that this was inappropriate?”

My hand shot up. A few other hands see-sawed. Most stayed down.

Not only did the people in the room not see it as problematic (in fact several defended it), but the Supreme Court’s conclusion on this case was that while the student’s right to privacy was contravened, the school district nevertheless imposed no punishment on the teachers. No disciplinary, no nothing. Mind-boggling.

Thankfully, this article is a little more gentle – looking as it does at US nativities and the Plastic Reindeer rule- but I hope it is still interesting. It certainly was to write.

One thought on “Jesus is the Elephant”