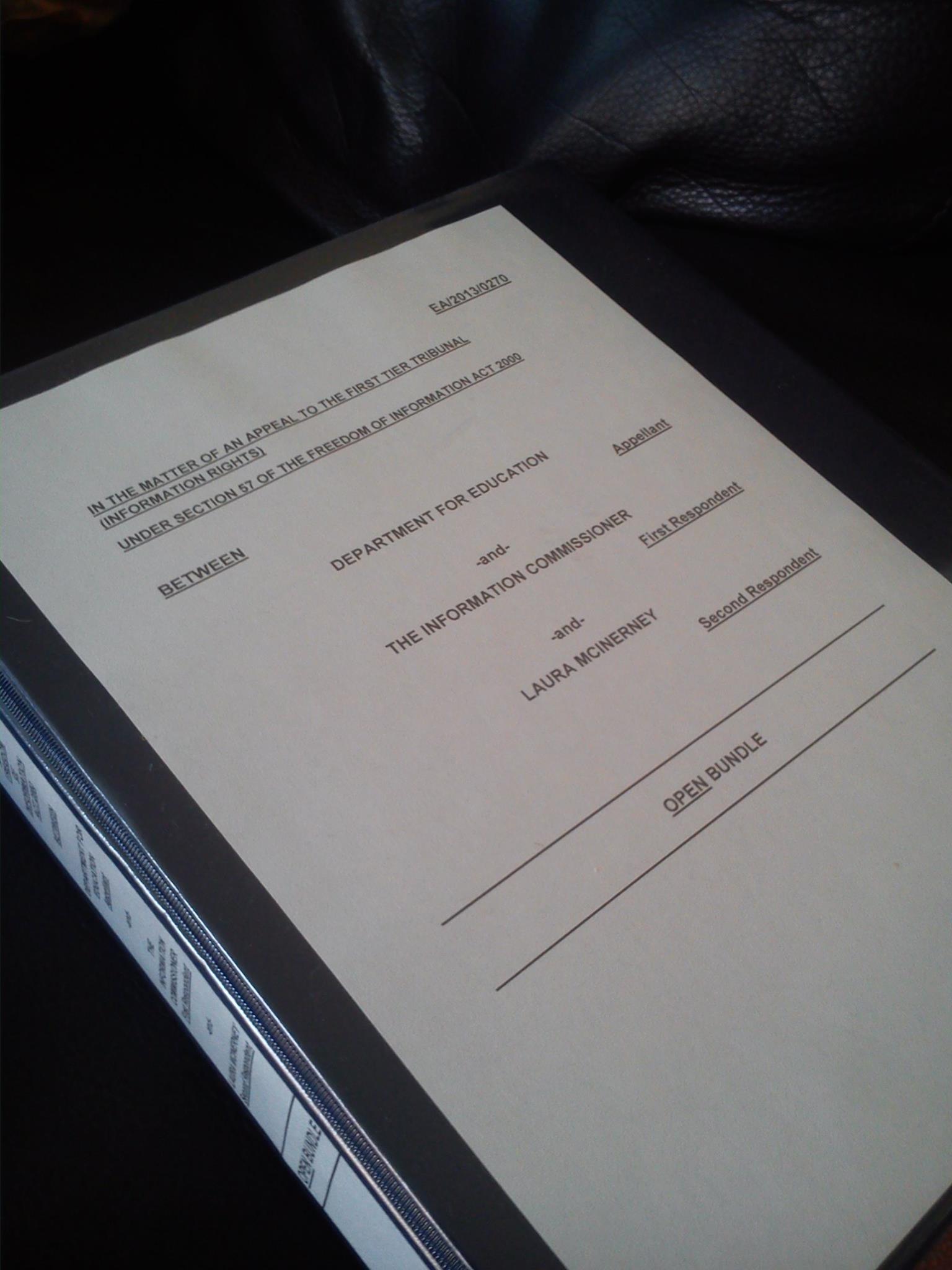 Twenty months ago I asked the DfE for some information about free schools; next week I will be in court for a 2-day hearing. During the hearing, the DfE will appeal a judgement from the Information Commission Office stating that I ought to be given the documents.

What did I ask for that was so controversial? (1) Free School application forms, and (2) Decision letters sent to applicants outlining the reasons for their school’s acceptance or rejection. Until 2010 similar materials were always available to the public. If a local authority opens or applies to expand a maintained school, they still are. Furthermore, when the Information Commission Office reviewed the case he said the law fell ‘very strongly’ in favour of disclosure. Hence, at that point, I thought I had won. But I was wrong.

The process is actually a ‘tribunal’ rather than a ‘trial’ (though the legalese around the process has meant I haven’t always understand the difference). As far as I can work out, on the day, the DfE will have a lawyer, the ICO will have a lawyer, and I will be there to provide information about the specifics of the request and the free schools policy in general. One judge will hear the whole thing, with two other people supporting him [I think they might be some kind of ‘mini-judge’].

The hearing will take place on 4th and 5th June in Court 12 at Field House (15 Breams Building, London, EC4A 1DZ). They start each day at 10am and the public gallery is open from 9.30am. Should anyone fancy popping in over the 2 days, you can do as long as there is room. I have no idea how big the gallery is, but my (somewhat bemused) parents have already booked their London trains and plan to be there. So if you come along and see two rather panicked people throwing daggered looks at anyone giving me a hard time, do go and say hello. We’re also arranging drinks in a nearby pub after the Thursday date (the 5th) and I’ll post some details on that over the weekend.

Update 1: Tribunal room is tiiiny. Unlikely there will be space for people to sit on proceedings. Which feels like a shame.

Update 2: On Thursday, after the case, we’ll be drinking at The Knights Templar, on Chancery Lane, after 4.30pm – come along to say hello and find out how it went. I suspect I shall be there for some time.

Once it’s over, I plan to write more about the process. It is not for the faint-hearted. There have been months of writing court submissions, reading them, responding to them, trying to interpret ‘case management notes’, fearing every time I sent an email that I was doing something wrong, and there’s still the issue of having to stand up in front of a court room and speak. THINK OF THEM AS IF THEY ARE YEAR 9 is my mantra for when it all feels a bit overwhelming.

Still, I’m grateful for the whole experience. I’ve learned a huge amount about the law in this area, and I’m now unafraid to use it, or to help other people use it. Ultimately, I simply asked a question and stuck it out to the end. As I always say to Newly Qualified Teachers: If you’re going to set a detention, be prepared to chase. I just didn’t expect the DfE to be harder to catch than a naughty 12-year-old.