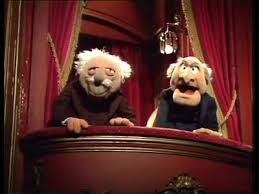 The problem with too many critical race theorists is that they are the equivalent of Statler & Waldorf – the muppets who sit up in the balcony criticising.

As someone who spends a fair amount of time criticising on blog posts at LKMCo.org and on here I’m in dangerous peril of needing to remove an enormous plank from my eye before continuing this argument. But hear me out: The aim of an academic is to add to the academic literature; they are endowed with graduate assistants, and opportunities to present and discuss, they have access to some of the most incredible datasets and almost any book they could ever want.  In this case I agree with the critical theorists that you have a responsibility to talk about difficult issues of inequality – gender, race, sexuality – but you also have a responsibility to (a) base it on some evidence, and (b) get down from the balcony and *show us* how you want research to change.

Having spent the afternoon ploughing through some required reading I found some amazing examples of productive, interesting articles where researchers had invested time into working with communities, collecting evidence from them, thoroughly analysing it and presenting useful information. A recent example of a critical paper was where a research worked with different communities on the meaning of a ‘good local school’. The researcher asked different groups of parents who were latino, black and white – all of whom live in the same area and say they value their ‘community – but who actually all had very different ideas of what ‘a community’ is.  This research not only gave voice to the ideas of under-represented parent groups, but it does so in a clear way, with maximum regard to the participants and in ensuring new insights are shared clearly.

On the other hand several articles have been little more than invectives towards all of human kind – denouncing on the one hand anyone who treats someone of a different race in an unequal fashion but then on the other hand aggressively demarcating ‘blackness’ and ‘whiteness’ and saying that differences are inevitable, and everywhere, and will be there for all time.  Maybe that dichotomy is true; and perhaps both ideas can co-exist; but I don’t see why I am reading about it in the pages of a journal article. If you want to rant, write an op-ed, or a blog, or a book.  If there’s no evidence to review how is this journal being peer-reviewed?!  It certainly isn’t on clarity of language, or consistency of ideas, or support for argument from other sources. Some of the articles are no more than a whine.

Advocacy on the part of academics is absolutely right. Simply by being a researcher you do not have to divest yourself of opinions or political activism. But it’s about figuring out when it is appropriate to share those opinions, and when it’s not.  If you find something useful in your research and you’ve written it up clearly in an evidence-based manner, then feel free to take those findings and go preach on Oprah or make a Kony-esque rally video for all I care. But we must be careful that we don’t allow ourselves to get into the notion that academia can be an arena for new research findings but it could also be a modern-day Athenian Agora where people stand around and debate about power. This latter part belong in politics, not the academy, unless you are bringing new evidence. Being an academic does not provide you with some magical power that says your moaning is special and needs to be listened to. Instead, if you have found out information – in the role of academia – then your job is to pass on that information.  If you wish to go do politics; off you pop; but don’t be doing it under the banner of being ‘academic’.  There is an important – I would even argue *crucial* – difference between the two and we must not allow them to lapse helplessly into one another. If we do, I somewhat fear that all too soon ‘being an academic’ would simply mean being a muppet in a balcony.