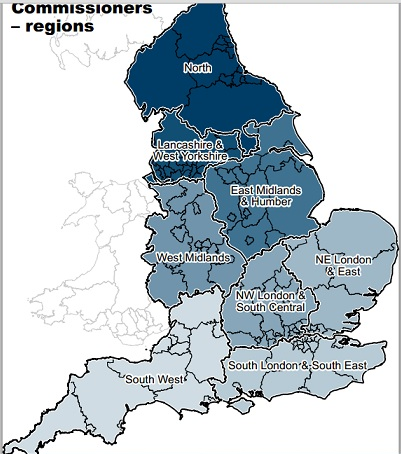 Announcements are finally due to be made about the appointment of the new Regional Schools Commissioners.

For the uninitated, the Commissioners will work in geographically mad locations (see map) and will oversee all academies and free schools in that area. Essentially, they will act as devolved ‘Secretary of States’ in their region, but the four main functions the DfE say they will perform are:

Intriguingly, they will also be helped by a “HeadTeacher Board”. So far this has been a quieter part of the policy. However, I today discovered a letter from Frank Green, the National Schools Commissioner, which outlines how it will work. It says:

So…. Some Serious Questions

1. A major concern here is the word “majority” elected. Why not “entirely elected”?

2. Why only headteachers in ‘outstanding’ schools eligible for being on the Board? Is this some kind of reward? Seems a bit unfair that you could be working to really improve a school and not be allowed to take part. Is the idea that if a school is already outstanding then it’s not a problem for  a Head to cut out one day a week?

4. Can you vote if you are now the head of a Trust? Seems a bit dodgy that someone who is now Head of a Trust, and will be wanting a…let’s say…’preferable outlook’ towards their sponsor chain could potentially be involved in voting for people who will then advise on preferred sponsors. Or am I being cynical?

5. How long are the terms? And can a new Regional Commissioner boot the old ones out? Is it like the House of Lords where you can stay forever? Can a mean new Commissioner make people resign?

This is not to say that the HeadTeacher Boards (or HTBs as they will no doubt become) can’t or won’t work. But it’s important we think through these issues in advance. No one likes a fiasco, right?

Update! Everyone can vote in an area… Okay. Have amended blog to reflect this.

Where Is The Desk Of The New Regional School Commissioners?

8 thoughts on “Serious Questions about the new “HeadTeacher Boards””