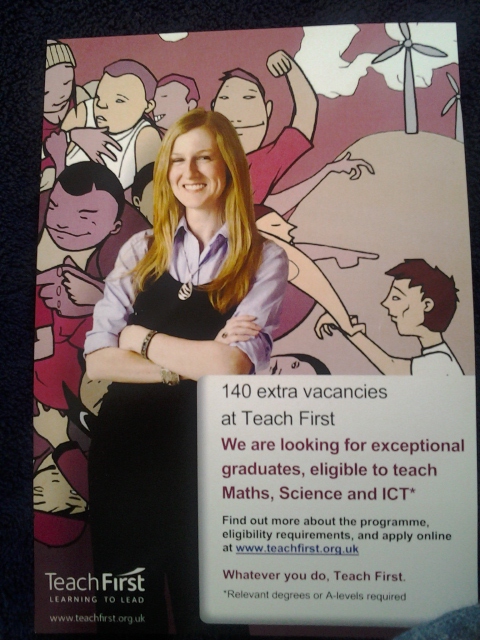 Justin “Juice” Fong – Head of Internal Communications at TeachForAmerica (TFA) – yesterday wrote a blog describing upcoming changes at TFA and making his own suggestion for the future.

The changes should interest people in England because they echo concerns raised before about TFA’s sister organisation, TeachFirst.

The pre-service year will allow undergraduates to take part in a year-long preparation programme while still at university. The details of how, where, what they will do are still to be knocked out, and it is certainly won’t be mandatory, but it signals TFA’s seriousness about ensuring participants hit the ground running, especially younger and more inexperienced ones.

The extended classroom support seems less interesting for TeachFirst, as its participants have always had second year, and some later year support. BUT a constant nag about TeachFirst is that its name somehow suggests it promotes people leaving after the two year programme is complete. (“TeachFirst, BankerNext, HAHAHA” is perpetually heard by anyone taking the programme. It’s not funny the first time. By the fifty-third time, it’s soul destroying.)

TFA does not suffer the same moniker problem, but its participants are accused of leaving the classroom early. As are TeachFirsters (whether they do or not is actually disputable). But as Fong says, the extended support that TFA is providing might start to disrupt that notion. He states: “Teach For America aims to remove the mental breakpoint of two years and instead say to its teachers, “Stay in the classroom. The organization is set up to continue to support you in the classroom for the next several years.”

As mentioned, TeachFirst  has always provided second year support, and there certainly used to be a lot of provision for year 3 onwards. In my subsequent years I coached participants, taught at summer institute, took part in school visits, attended policy meetings, and so on. Those experiences developed my classroom skills and kept my learning thirst quenched.

As the organisation has grown it has been more difficult to keep a handle on opportunities, and I know it’s something that is still being fiddled with and reworked. Which is why I am interested in TFA’s move. They are being quite decisive about focusing on a reduction in retention and are making a specific statement of what will be offered. I don’t know if TeachFirst would be in a position to do something similar soon, I’m not even sure they might want to or should do it. After all, TF cannot do everything and it might be that their limited resources are best off served doing other things.

But I think it’s a positive sign from TFA, and I am glad they are trying to keep more teachers in the classroom. If nothing else, TeachFirst should watch the results with interest.

Awww…This is from the days before my Michael Gove worrylines.

9 thoughts on “Should TeachFirst add a pre-service year? (And post-programme support?)”