One of my fears about Schools Direct – the government programme allowing schools to ‘train their own’ teachers – was the apparent lack of checks on school-based support and the situations participants might be placed in. I’ve constantly been told not to worry as only schools with training capacity will use the School Direct system. But the evidence suggests otherwise.

Eleven years ago, when TeachFirst began placing trainee teachers in ‘challenging’ schools, it quickly became obvious that putting trainees in ‘Special Measures’ schools was a terrible idea (and that those whose school go into the status during their traineeship need a lot of extra help). Schools that are barely functioning well enough to teach their children are rarely able to give trainees the mentorship needed. This problem led the government to require schools as part of their Special Measures conditions to stop hiring any newly qualified teachers – i.e. even teachers taking their first job after university-based teacher training. It was rightly felt that new teachers needed to be in a more supportive environment while they were still learning to teach, and that students in schools which may have been struggling for several years needed more experienced teachers.

However, the introduction of Schools Direct now means that schools rated as ‘inadequate’ can recruit, and apparently train, completely unqualified teachers.

When I mentioned that this might happen, the common cry was: “Yeah, but they won’t”. Except, they are. 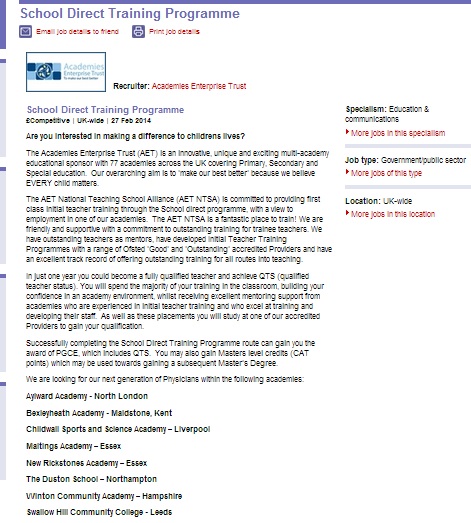 In fact, Winton Community Academy was rated last December as being inadequate in every category, including teaching & learning, and leadership & management.

Even though the school now has a new Principal and much effort going in to turnaround, if TeachFirst quickly learned that trainees struggled in those circumstances even given significant external support from TF, how can Winton expect to provide an adequate training ground for a participant whose programme will depend on a team whose main focus will be (& should be) making up for serious decline in the educational provision of its students?

If schools are to be given responsibility for training, they need to use that power responsibly. For everyone’s sake involved I hope they learn the lessons of TeachFirst and decide that an Inadequately rated school is not the place to put a brand new trainee teacher.

6 thoughts on “Should we be placing unqualified teachers in Inadequate schools?”