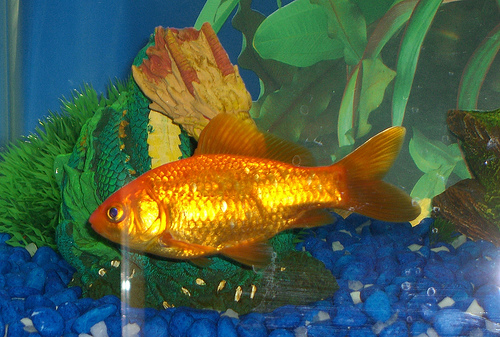 Not Jacob. But an approximation.

There’s a story I occasionally tell about teaching that raises people’s spirits. It’s the story of Jacob the Goldfish. So as it’s New Year’s Eve, I thought I might share.

I actually mentioned Jacob right back in 2010 when I first got Twitter and appear to have thought it was Facebook:

now has a goldfish in her classroom and spent this afternoon singing about the nervous system to the tune of happy birthday. Result.

The Happy Birthday thing? No idea. But the classroom fish? I can tell you that story.

First of all, he wasn’t actually mine. In a blog earlier this year @betsysalt asked a bunch of questions of teachers. One was, “How do you make sure the carers in your class get support to do their homework when you know they don’t have time to complete it at home as they are looking after someone they love?”  My answer? Get a fish.

Okay, it’s not the only answer, but students who are also carers often become habitual about subsuming their own needs under those of their family. Usually they desperately want to do their homework or be on time, but if I was 17 and faced with two parents struggling in cancer battles and asking me to be with them for their treatment sessions, I’m pretty certain my A-Level classes would have paled into insignificance. Likewise, if I was in Year 10 and if cooking dinner, rather than having my mum’s stressed body, fading fast to the perils of motor neurone disease, undergo the strain then I’d likely have been right there peeling spuds and worrying about my maths homework later.

While the self-sacrifice is understandable, it is nevertheless problematic. While many children get precious little time with their parents, they also get only limited amounts of free education and the pathways back to qualification are (sadly) growing more limited year by year.

So, as a teacher, we desperately want students to choose learning, and put themselves first on occasion. But doing that sometimes means finding a way to make your classroom matter as much as the responsibilities at home. And to do that – in one very specific instance – was where Jacob the fish came in.

Children have a remarkable capacity to care for living things. I discovered this when growing sunflowers with my first form. Habitually tardy kids would come in early to feed, water and rotate their plant. They quickly learn that if they don’t look after it, the plants get wilty and die.  The effects of their care is often the first time students realise how their actions have consequences for living things.

Young carers, however, know this too well. One particular sixthformer I taught, let’s call her Lily, had two ill parents and a younger brother to look after. She was bright, and curious, and desperately wanted to go to university. But she was torn in a hundred different directions and I knew that appealing to Lily’s own needs wouldn’t work. She didn’t operate like that. Her wants had been buried a long time ago. But her capacity to care for others was also her strength, and I figured we could use it.

In a long discussion about the need to improve her attendance, she mentioned that she liked fish, so we batted around the idea of getting her one. If there was something she had to look after, at school, I asked – would it make it more likely that she could excuse herself to get in to our classroom? She reckoned it would be worth a try. I promised not to feed the fish, and instead she would need to be in school early each day to get it done, this ensuring she would be in and on-time to lessons and could then use her free periods for homework.

Being honest, I thought the fish would die.

However Jacob, as she named the goldfish, did not die. Lily went and chose him. She bought a bowl. She sometimes bought new toys for his tank. She fed him, every day. She regularly changed his water (even though it was a rigmarole). And on Fridays Jacob would go home in his transportable carry case. On Mondays he would come back.

Lily’s routine improved. Something beyond herself gave her a reason to be at school. It didn’t work perfectly. There were infrequent bouts of absence in which she would send a message to a friend to sort the fish (I would allow this, though with a scowl, yet was always pleased to find that the next day she would turn up in a panic: “DID THEY COME AND FEED JACOB?”). In terms of getting her to school 95% of time and doing what she should be doing, though, it absolutely worked.

Beyond helping Lily, Jacob became a silent oracle to others too. They would sit and watch him, ask his advice, chat to him. Somtimes I would come in to my room after lunch time and find an anxious student sighing at his bowl. “Telling your problems to Jacob?” I would ask, and they would sheepishly nod and patter away. Even I lamented at his scaly self. At the end of a lesson I would look over helplessly, “That lesson sucked didn’t it, Jacob?” Jacob would look back blankly. We both knew the score.

At the end of the school year Lily took Jacob home for good, where he lived out his days in more peaceful surroundings than among the echoes of Room B2.

In September this year she started at university studying Classics. I nearly burst with pride when I found out. And I bet Jacob, in his glass-bottomed bowl in the sky, is looking down in silent happiness too.

One thought on “The HeartWarming Tale of Jacob the Goldfish”