The ‘lack of wanting to be clever’ problem is something anyone working in classrooms will encounter.

One of the things I learned to ask disaffected students was: what would you have to sacrifice if you suddenly did really well, academically speaking?

This is how the conversation usually went:

After the goading I would step back and let the student figure it out for themselves a bit. Sometimes I would lead the way in discussing what’s scary about being even just “a bit more clever” than they currently are.

I was brought to this technique by a little-known theory of Abraham Maslow’s called “The Jonah Complex”. It is first mentioned in The Farther Reaches of Human Nature, and explains why humans who want to be brilliant also find the idea terrifying: 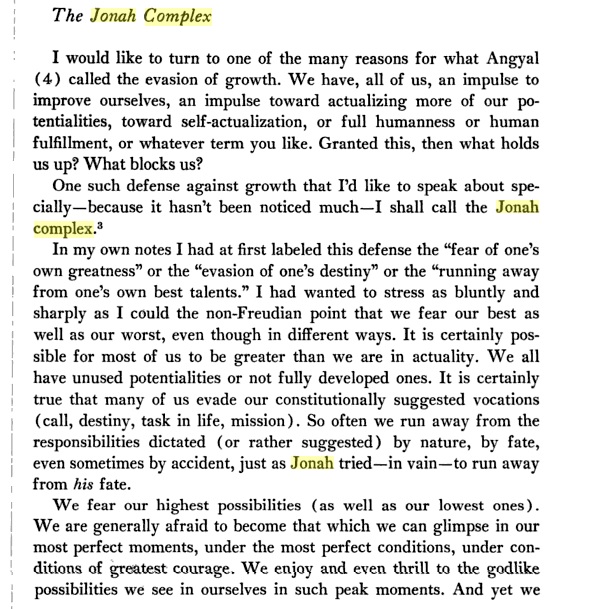 (The excerpt is taken from The Farther Reaches of Human Nature – a brilliant book which I cannot recommend enough).

Maslow continues by pointing out that if we do the best possible, we (a) are stuck out on our own, because being at the top entails being lonely, and (b) are only able to move down afterwards. How terrifying! How utterly awful! To spend one’s life at the top is to be afraid that at any moment you can tumble. This would be too much for most people to cope with, let alone our hormonally-charged teenage students. Hence, many of them spend their life fighting to stay away from being brilliant, fearing that if they should reach their potential it will only make them lonely and stressed.

As an example of how common this fear is, Maslow would ask his university students: “Who is going to write the next great psychology textbook?” No-one would ever admit to it.

But then he would say something which I think is one of the most important phrases in all of life:

If not you, then who?

I’ve used this phrase a lot with kids. “I’ll never get into Oxford”, they would say. “Well someone has to,” I would respond, “why not you?”. [Same goes for being prime minister, taking a person they fancy to the prom, getting a top mark on coursework….I mean, someone has to. Why not them?].  Of course, we don’t always get what we want. Not everyone can do these things. But Maslow would also tell his students that if they purposely plan to be terrible (or not be prime minister, etc) then they won’t somehow escape misery. That’s not how playing it safe works. Like Jonah, they will run away only to find themselves scooped up and asked to face other challenges. But by taking the path of least resistance they’ll now be less prepared for the challenge and without a shot at achieving their dream. He ends by pointing out that while we cannot avoid unhappiness, we can learn to be less scared of brilliance.

That sounds a bit sappy, I know. But The Jonah Complex is a real thing in our classrooms and I’m not above a bit of cheesy sloganeering if it helps students overcome achievement-fear. So, to that end, I have produced the following meme. Feel free to download and stick on your classroom wall. Stick it on all four of them if you can.

And always remember to ask that kid who is about to give up in despair: “If not you, then who?”

4 thoughts on “The Jonah Complex: Why We Are Afraid Of Being Brilliant”