Bit late on this month’s blogsync but better than never, right?…

Topic (last) month was: Marking With Impact. Having taught several subjects across KS3 – 5, my marking techniques have varied. Here are just three which I think had impact even if they’re not faultless.

In my first year I taught 580 students per week. I taught each class of 30 once per week, and face an SLT-imposed minimum half-term marking policy. If I did what was expected, I would have needed to mark 96 books per week. Except, I had to wait for students to fill up their books first which meant that by half-term I had 580 books to mark. In a week.

Hence my TeachFirst tutor recommended the following for the sake of my sanity: 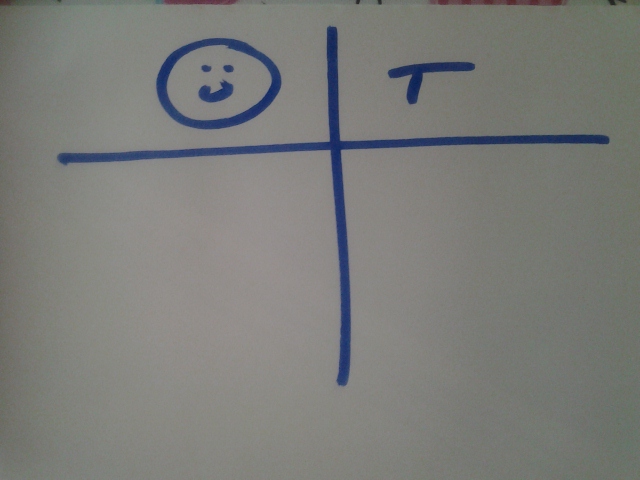 Smiley Face = one thing I liked

T = one target for next time

Do not write more than you need to [so, no “hi mohamed, this was a really good piece. i really liked that you”…. JUST STICK TO THE POINT…you can show the kids you care by your behaviour in the classroom]. Once the columns are filled, stick down a level/grade/score if you must.

Next time, make sure to look back at the target and state whether or not the student achieved it in the next piece of work. If you can, have it affect the mark. And stick with the target until it is achieved. [You can also add new targets, but don’t drop any until they have been met].

Speed Tip #2 – Print stickers for common “i likes” and targets

There are two ways to do this.

One, I would purchase customised target stickers from Sticker Factory with things like: “Add an example from the text to support your argument points” (non-fiction analysis) or “give two reasons why the study was valid/reliable” (psychology).

OR, if the work was more specific, I would type up targets, print them on a blank A4 Sticker Page, print, cut up and stick into books. (Cheaper than Sticker Factory, and more flexible). Even with the cutting it saved time because I type a lot quicker than I handwrite (and I used a mini-guillotine for cutting).

What was the impact? Speed. Pure speed. This got me through SLT requirements, my students got drip-fed regular feedback, parents found it easy to understand and the targets accumulated so students couldn’t ignore them. There are predictable downsides (e.g. it’s not massively thorough marking), but if speed is your concern this is where to start.

By contrast, this marking technique was loooong but had HUGE impact on work quality.

When teaching Sociology AS I noticed my class needed more opportunity to ‘bat around’ difficult new concepts. Faced with new ‘-isms’  – e.g. functionalism, marxism, symbolic interactionism – students needed time to discuss what they are so they could assimilate with their prior knowledge and because the language can be a little tricky (so they often struggle with -ism vs. -ist, which takes a bit of practice to grasp).

Hence, I created homeworks where students responded to letters written by imaginary characters. Perhaps a sociologist, perhaps their cousin who was stuck on their schoolwork, perhaps a researcher interested in teen views on an issue. Because it is a letter, students were less afraid of just ‘attempting’ to put their ideas down – and I could vary up the formality depending on how comfortable I felt students were with the concept. [i.e. more comfortable, more formal].

But, more importantly, I didn’t mark the letters. I wrote responses back. IN CHARACTER: 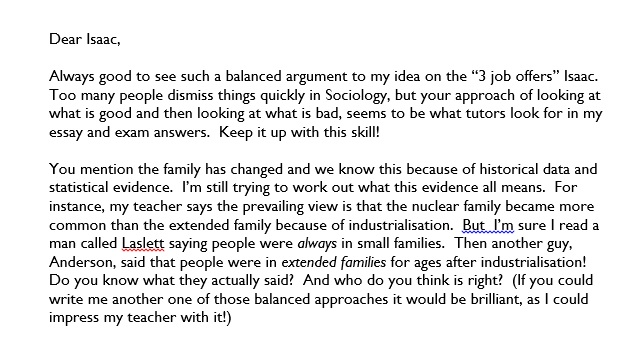 This did a few things. First, it made feedback non-threatening. Two, I could make it personalised to the student (as a big One Direction fan I can imagine that….). And three, it was fun! Students wanted to read their feedback and they really really wanted to respond. Students who were reluctant to do homework normally would continue back and forth several times until they understood a concept.

Obvious downside: It takes ages. The class had 18 people in it. A handful needed to go back and forth several times. Thankfully I am a speedy typer, so that helped.

Upside: Never have I known such engagement with a class in terms of feedback. Also, it

showed them that I really cared enough to put in this much effort.

Overall impact: Really useful when you have older students, struggling with a particular topic, who need a bit of a boost and a bit of belief that you care about them. In those instances the impact is worth the effort. Use sparingly.

In my last two years of teaching I mostly taught GCSE Citizenship and GCSE Humanities.

I had seven different classes who I usually saw twice a week. For those students I did this:

As you can see there is information about target grades, past grades, checked class work and homeworks, and cumulative targets. There was a sheet for each module and it was stuck on the FRONT OUTSIDE of folders (using the A4 sticker sheets, above). I was very clear with students it wasn’t there to embarrass them. It was there how we were all doing mattered, and we needed to be able to see it.

I explained that I was impressed with anyone improving. The grade didn’t matter, what I wanted to see was improvement. In return, I displayed average test scores for each class on the wall and explained that my aim was to see those averages going up. If those averages were sliding downwards then I knew I wasn’t doing my job right either.  [And when, inevitably, some classes were struggling I would talk with them about what I was doing to ensure they were all learning better].

I tried to keep feedback specific and encouraging. Students could also gain points for behaviour and homework. [There is a tiger sticker not pictured here that a student received as an extra boost – yeah, even at GCSE, they love them!].

Ultimately, This strategy isn’t just about marking. This was about creating an ethos of improvement, and making feedback central to that. Also, it wasn’t as time intensive as it looks. I typed the sheets in advance, and they were stuck on by students in lesson. I also found that because students were so focused in their work I could mark during lessons.

Overall impact: Again, it passes SLT requirements, parents like it, it makes record keeping easy,(students could take books home, but not the folder, so this meant I always had it to hand), and it gave us a clear focus for our studies. It’s not quick, but it did work well.

7 thoughts on “The Quick, The Weird, and The Thorough: How I Mark Student Work”