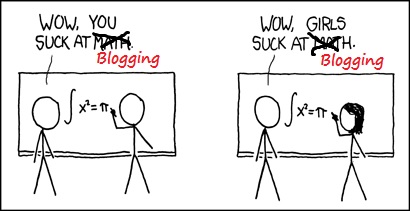 XKCD How It Works: Remixed
(NB: I don’t think this is how it works, AT ALL)

99% of the time, I forget I am a woman. At least, I think about it no more than I think about my being short, or Northern, or a Leeds Rhino fan. Other people might think about it. And because I’m not completely naive: I’m certain all kinds of subconscious cues affect my behaviour in gender-driven ways. But my main reaction to people mentioning I am female is usually surprise (because I had forgotten), swiftly followed by boredom.

The worst is when people ask me why women don’t blog and tweet about education as prolifically as men*. I don’t know why. Clearly, whatever it is about my gender that allegedly inhibits me from hitting the blogpost ‘publish’ button simply didn’t kick in for me.

When I point this out, people invite conjecture about their pet “no-woman-blogger” theories. Perhaps I think women do more childcare? Or have less time? Or fear self-promotion? Or reject the “aggressive atmosphere” of Twitter? Sometimes they give me a great big list of these theories. Doesn’t matter though, because I still don’t know.

Here, however, is what I do know, and what I would like any wanna-be-female-blogger worried about entering the fray to know: In four years of tweeting and blogging I’ve rarely found the medium to be aggressive, and I can’t think of a single occasion when the issues I encountered were solely down to being female.

Have I provoked the ire of angry commenters? Sure. Have I been picked on unfairly? Yes (it started here but became a debacle). But both were rare occasions and easily defused. Plus more, so much more of the debate I have experienced has been positive, and illuminating, and about ideas and learning, and not at all about me personally. Only once in four years have I blocked someone on twitter due to abuse (& that was a person saying racist things about my students).**

That said, I’m not stupid. I realise my pleasant online existence thus far is part down to fortune. I haven’t done a job that means people hate me a priori (e.g. advising a political party), I don’t hold unorthodox educational or religious views, as a white person I don’t get racist abuse, and because I have no children people don’t call into question my parenting skills. So, I understand, I have blogger advantages that others do not and I don’t know what I would do in those situations, so I can’t really discuss them.

But, given what I DO know, what are my “messages” for would-be “women bloggers”?

Nothing really. I point all new bloggers to the same advice on edu-blogging – it’s here, by @oldandrewuk – and is excellent. But seeing as I keep getting told that women are not blogging because they are afraid of the “aggression” here’s my suggestions for dealing with that particular chestnut (and these tips go for the fellas just as much as the ladies):

1. Model the behaviour you want from people – If you don’t want to receive aggression on Twitter, don’t be aggressive. When someone annoys you, take a second to think “how do I wish this person was behaving?” and then YOU behave that way. Back in February, when I awoke to find the @toryeducation account had written ludicrous tweets about m, I reminded myself that I  want twitter conversations to be curious, interested, helpful and thoughtful. So that was how I responded. In fact, that’s how I try to respond to everyone on Twitter even when I think they’re being a pain in the neck. Like any human, I slip from time to time but I do try hard not to. People comment that this must take a lot of patience. It doesn’t. It just derives from my belief that, with twitter, you will largely get back what you put in. So if in doubt, go for curiosity and helpfulness, even if some other outburst might be more immediately satisfying.

2.. Be pleased with criticism, and use it for good. If people are responding to your blog, it means they read it and have engaged. Well done! In this vast internet world you have written something that made people take to their keyboards. But don’t let the pride ruin you. The next step is vital: listen to their criticisms. In their criticisms are all the clues you need about why your opinion is being rejected and why your solution, or perfect world, doesn’t yet exist. If people attack you personally, rather than arguing your ideas – point it out. “I understand you don’t like the fact that I’m from Widnes, but how does that affect my point about Ofsted/abortion/mars-bars-being-the-best-chocolate?” Alternatively, when the critcism is about your ideas – by goodness, leap on it! – enjoy it, think about it, play it out. And most of all be willing to revise your position if presented with compelling new information. Your aim should always be better understanding and less about being perfectly correct at every turn.

3. Unless you are being paid for blogging, remember that this is not a job,and you do not owe anyone anything – Some people who want to blog get weighed down thinking there are “rules” to obey. They believe that to “be a blogger” you must commit a certain amount of time. Or write with a certain quality. Or have something new to see. All of this is nonsense. If you can write, and you have opinions, you can blog. The fabulous thing about the internet is that it isn’t full and you can stuff your page full of terrible content if you wish. No-one can stop you. And, back to the feminism point, if anyone even mentions that your stuff is boring or not being read because you’re female, then remember…..

4. Don’t accept bullshit arguments about how “being a woman” stops you doing stuff or makes you suck at it  – Maybe being female is uniquely disadvantaging in the blogsphere. Maybe people read my stuff 50% less than if my name were Peter. But unless your gender is changing soon (which mine isn’t) then your only solution is to think “I’m a woman and I’m going to do it anyway”. After all, the internet is a big place and so I will end by saying this again: No-one can stop you from being a blogger other than you. And if you do get things down on paper you never know who will appreciate that you did.

* Andrew Old wrote a useful piece arguing that there are actually lots of women education bloggers if you go looking for them. So if you want to debate that point, go read his blog. (Also, see comment below).

**I am aware that by writing this I might unleash some people who want to be blocked by me just because I haven’t dealt with abuse so far. Also, because I’ve talked about my being a woman I will have broken some purdah which I have thus far maintained and hence a torrent of insults will suddenly rain upon me making me wish I had never written this post. It’s a SIGH-some thought, and the irony will kill me, but I’ll deal with it if I have to. Curiosity, remember?