When people don’t like your opinions on blogs, or twitter, or any other form of social network, the backlash can be furious.

If it ever gets fierce I’m lucky that Dad McInerney puts things in perspective. As a shop steward for 30 years and a political mastermind from what seems like birth, his words are from experience. They also tend to be true.

For anyone who doesn’t have such wiseness around I thought it would be worth sharing what he says so that, if you’re ever in a social media tizwaz, you can walk yourself through the process. It helps, I promise.

Imagine someone is wrong on the internet. I know it’s tough, but try. They have decided that something you wrote, or said, or did, is terrible and the criticism or ensuing debate has upset you.

In this situation I phone my dad. And this is what he says:

First, he points out how positive it is that anyone cares one jot about what you think.

“Isn’t it marvellous that they’re reading your stuff at at all”, or

“Blimey, they don’t like you and yet they’ve spent ages responding? I think that’s brilliant”, or

“Isn’t it good that someone disagrees? It’d be terrible if we went through life unchallenged.”

Next, he minimises the criticism.

“Wouldn’t worry though – I mean, who are they? What’s the consequence?”

“Sounds to me like they’ll forget about it tomorrow”

“Is anyone threatening to shoot you? Are you going to die? If not, I honestly wouldn’t worry.”

But he’s not an idiot. He knows upset can’t be magicked away. So next he empthasies.

“Of course, it’s always upsetting or annoying when people don’t understand what you say. But it doesn’t mean they’re right”

“You should be angry. Who wouldn’t be angry? Not worth being angry for long though, is it?”

“If someone said that to me I’d be upset for a few minutes. But if I knew I was right I’d get over it”

He also seeks the other side of the story.

“How many people liked it? … That sounds like a lot more than didn’t”

“So most people thought it was sensible but you’re upset about a few people who didn’t? Hmmmm.”

“What do the people you care about think?”

That last one is particularly important. If the people you care about don’t like something you’ve said or done then he will softly suggest a tactical error has been made and you should re-trace your steps. (“Sounds to me like your words came out wrong. You obviously didn’t mean that. Just explain what you did mean. Everyone gets confused from time to time”)

And then, finally, he reaffirms how it’s a good thing that people are engaging.

“Anyway, as I say, it’s marvellous that you’ve got people thinking. They’d be half asleep watching telly if you weren’t and instead they’re having to think about hard things. That’s good. Well done you.”

With job done he inevitably remembers that Match of the Day/Antiques Roadshow or whatever else he wants to see is on tv and he runs off.

As never-ending and personal as a debate can feel, when it comes to opinions, if people are engaged, their criticism has zero consequence and the majority of people are non-plussed, it really isn’t worth getting upset about.

Should you ever need a reminder of that, do come back to this page. Dad McInerney’s words are here for everyone to use. 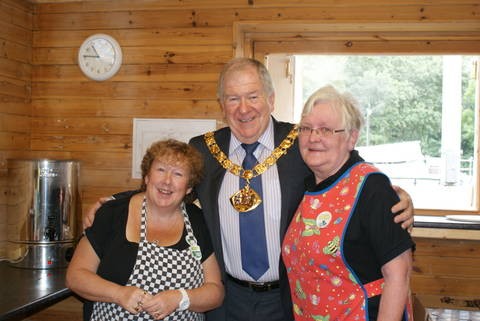 My dad, when he was mayor, visiting a Macmillan coffee morning. I think he slept in those chains.