Both the West Coast Mainline fiasco and the issues with Ofqual have got me thinking about public expectations on government Ministers and ordinary MPs to deal with an ever-increasing level of complexity across a range of sectors.  I have worked both as a member of a train bid team and as a school teacher, and both things are fiendishly complicated even though they involve services that we regularly interact with. In fact, I wonder sometimes if the mindless way we use transport and schools is one of the reasons why people expect it to be easy to understand when the brutal reality is that many of your taken-for-granted assumptions about the way those sectors should work are often quite wrong.

One big concern is that as we move toward a system where governments outsource the provision of services to outside agencies there actually becomes a greater responsibility on government for scrutinising (a) who will be the right person to run the service, and (b) are they doing a good enough job of it.  On the one hand this should be easy because the people involved in the commissioning are now at arms length from the service and so should more easily be able to see what is going on in a dispassionate manner. But on the other hand, if Ministers are parachuting in and out of departments along with their special advisors and civil servants fastly streaming around in order to get to an executive position, then it can mean that expertise are vitally missing in order that scrutiny can be adequately carried out. 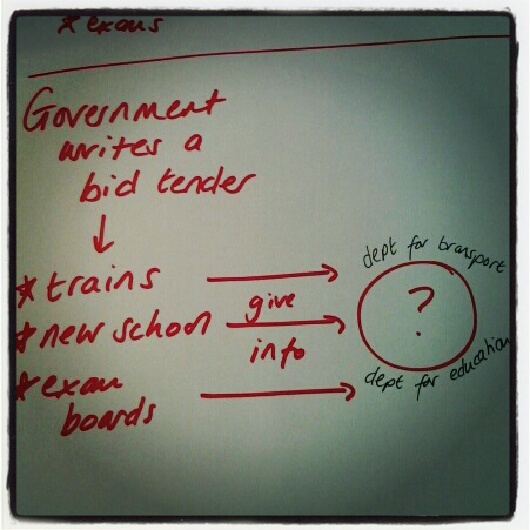 The government writes a ‘tender’ (a document saying what it wants in a service) for a train service and then all the train operating companies hand in their best offer.  Arguably, this is the same situation for Free Schools (although there’s no official tender writing) and it’s what will probably happen with new exam boards.

But the big red circle shows the main problem: Who decides whose bid is the best?  And how do they decide?  In the case of exam boards, for example – who will make that call?  Will it be the Minister?  What if they’ve just arrived and don’t really understand anything about their topic? (You can tut at that remark, but I would argue that Justine Greening never really understood much about trains – as was apparent in several questions she answered on tv – and in the amount of time she was in the position it is small wonder) .  The view seems to be that, technically, civil servants are making these decisions and then they are signed off by Ministers. However even that appears to be problematic.  How do they know what is the best one?  Do they have to take advice of people within the profession?  Unions?  Technical bodies?  Is this advice open to the public once the decision has been made so that it can be scrutinised?

And even if we assume that hero civil servants do understand bids fully there is still a problem: They are not the ones doing the scrutiny.  You see, the next stage in this process is that once the service is given over, MPs on select committees generally try and scrutinise the goings-on. Where something goes wrong (as in the case of the exam boards) the Select Committee are supposed to get to the bottom of what is going on. But unfortunately, and to put it bluntly, most MPs are not very good at  this part.

So now we have this problem: 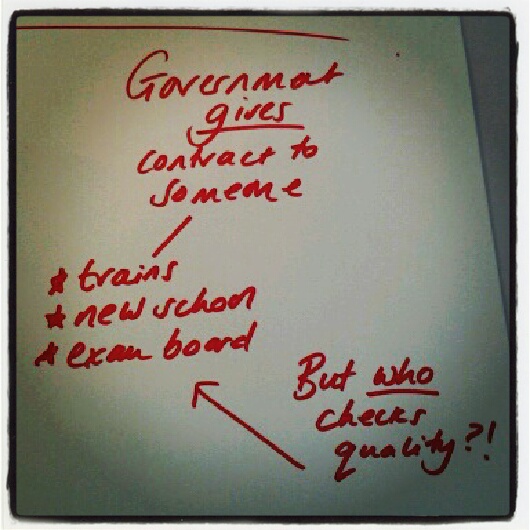 The Select Committee that spoke with Ofqual on the GCSE Fiasco spent most of their time trying to get their head around the basic day-to-days of a service and didn’t really ask the hard questions that would hold the service to account. Members on both sides, whose primary job is as an MP, found that they were supposed to understand the inner-workings of something that we all think is simple (schools) but actually has incredibly complex parts to it.  This then means that we have parts of public service fundamentally breaking down and disappointing people but without there being clear and transparent mechanisms for people getting to the bottom of the matter.

At one time this might have been okay. The whole of Parliament was a sort of mist through which only the political and media elites could peer and if things were a little difficult it didn’t  much matter. But as Parliament TV, and access to internet records, are meaning that more and more people are able to see what is happening there has to be a ‘clearing up’ of all this mist so that the processes are more clear and that the electorate can clearly judge if things are being run competently and in a manner that they believe to be suitable.

This means that certain aspects of Parliament have to change, particularly the Select Committee system.  One of the suggestions I have made before is around review boards.  That blog specifically suggests a Curriculum Review board for education but I think there may be something in a more specific use of experts, perhaps using a list system, or drawing more systematically on the expertise of the House of Lords.  Indeed, I think if such review boards became the basis of appointment to the House of Lords it would be a reform of the system that would help make it more useful to the electorate without the requirement for Lords elections.

Unfortunately this is not a sexy issue nor is it one that the public readily understand. I doubt if changes like this would make more than a 5 minute slot on Daily Politics, however they could have a meaningful impact for political debate and its legitimacy in the future. I also genuinely believe it would help to lessen the number and impact of political fiascoes appearing due to problems around franchising, and without this change I can only imagine that their numbers will grow given the tendency in government (on both sides of the house) to move towards the government as a commissioner and chief scrutineer of public services rather than the government being the lead provider.