In October, education secretary Nicky Morgan launched the ‘Workload Challenge’ – a consultation with teachers about their work burden and would could be done to reduce it.

The Department for Education tweeted the hell out of it and made a thing about how they were analysing all 44,000 responses.

We’ve now read every #workloadchallenge response. Next – to work with the sector panel to develop an action plan https://t.co/xfmx7yNlDL

I decided to ask for the workload challenge database of answers. Having looked at the survey, I knew it was created using survey monkey so would be easy to download.

I completed the DfE Freedom of Information Act contact form 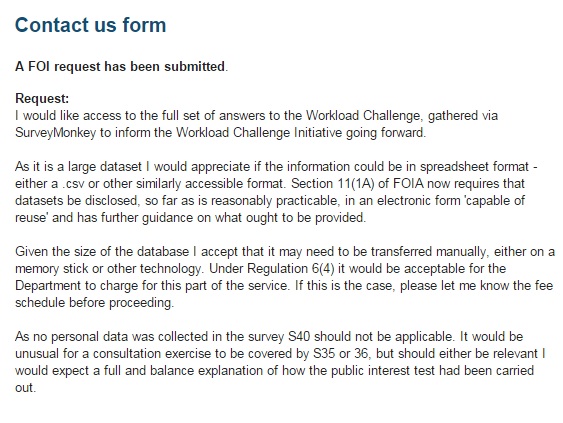 I waited for the full 20 days, and then received this letter.

It is long to read the full thing. In essence, it says:

* We believe that people have strewn personal data throughout their application forms and going through and redacting the forms, and removing that personal data, would be such an enormous burden that it constitutes ‘vexation’ and therefore can be legitimately turned down under the law.

* We get that you won’t like this. But hey, we published a report on the ‘findings’. So, transparency top trumps!

This is the exact same defence used to turn down my free school requests.

It is also a massive problem. 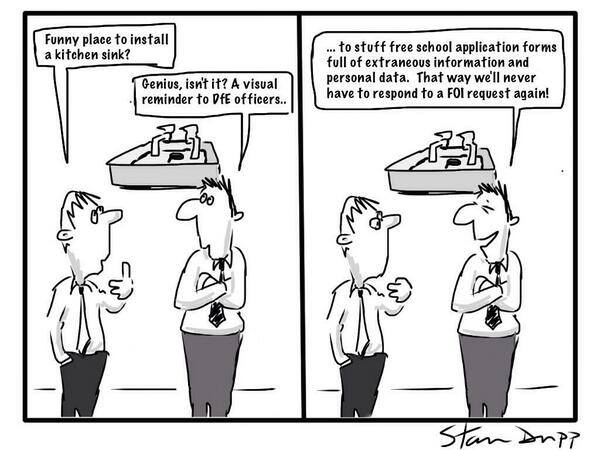 See, the whole reason why the cost of redaction can’t be used under the part of FOI law which normally allows public authorities to turn down a  request due to cost is because, if it was allowed, anyone wishing to hide information from the public could simply embed their national insurance or credit card details somewhere on each page in a document. That way, when a member of the public asked to see it the authority could simply say “sorry, there’s too much random information” to remove.

If redactions were allowed to be counted as a cost – we would never have got the release of information that led to the MPs’ expenses revelations.

Now, the Department have found a new loophole where they can simply claim that redactions are ‘burdensome’ under section 14, i.e. the ‘vexation’ clause – which was originally created to stop people who were aggressive or malicious but has now seemingly expanded to mean ‘we think doing this would be a lot of work’.

But – look again at the tweet at the top of the page. The Department for Education clearly state that they have already read through all the information.

An annex in their technical report states that 60 volunteers across the Department ensured they read each answer and highlighted any that didn’t match key themes in a sample of ~1650 surveys analysed in more depth.

Why didn’t those civil servants just redact the personal data while they were there? It really wouldn’t have been a big deal.

That this wasn’t done suggests  there was no plan to publish the information – despite the fact that the government’s own Consultation Principles from October 2013 specifically state:

“Consultation responses should usually be published within 12 weeks of the consultation closing. Where Departments do not publish a response within 12 weeks, they should provide a brief statement on why they have not done so.”

If you were planning to follow this rule, you would – surely! – have got the 60 volunteers to also do the redactions.

Having gone through the courts once over this exact issue, I am not minded to go again. But I can’t help feeling that this “we can just randomly claim a burden when we feel like it” get out card is a serious blow to the public’s right to transparency.

I get arguments about austerity and cost, and I’d let it go on those grounds. BUT – this really feels like there was negligence in a responsibility to think about how information can be provided to the public. It shouldn’t be an after thought. It should be part of the process.

When 40,000 teachers have spent their time completing forms – I think the least we can do is share that collective knowledge.

3 thoughts on “Vexatious again: This time, for asking to see the Workload Challenge results”