When I first started teaching I cried at least once per week for three months straight. One day a teacher even found me sobbing on my classroom floor in the pitch black at 3.30pm. The kids – probably thinking it best that no-one saw the mess they had made of me – had turned the lights off as they left. I didn’t have the strength to turn them back on.

But I was determined that it wouldn’t continue. Like some kind of value-brand Michelle Pfeiffer, I was hell-bent on winning the behaviour stakes though, unlike Pfeiffer’s character, I didn’t know any karate. Detentions, instead, would be my weapon.  Unfortunately what no-one tells you about detentions is that (a) getting naughty students to turn up requires you to possess the cunning of a diamond theft,  and (b) once in the detention you now have to spend A WHOLE HOUR with the children who are most annoying. Simply because it’s after school they don’t suddenly become perfect human beings, in fact if they’re annoyed about the detention they can become downright unpleasant. Worst of all, if you have several children on detention at once (or several-teen of them as was often the case for me) then they will delight in whining, deriding and generally scoring points for how obnoxious they can be in front of one another. Without careful planning detention can turn out worse for the teacher, than it can for the kids.

So what could I do? How could I use detentions effectively so that they didn’t end with more tears?

First – I became fanatical about my detention appointment systems. The school I was in required my filling in a triplicate detention sheet: giving one to the child, one to the form tutor and one to the school receptionist. To manage this I did batches each evening based on lists I gathered throughout the day. I always told students to expect to see a detention slip turn up the next day but I’m certain they didn’t believe me. It took a while some nights to fill them sll in but I never failed on it. I put the slips for the child in registers and/or gave to the form tutor. If a child came and told me they couldn’t do the detention for a reason (football, dentist, whatever) they had to change their appointment in a folder where I kept a diary of all exoected attendees. That was their only choice. If they missed detention I doubled it (first one was half an hour, second one was an hour). If they missed it twice I phoned their parents and made their parent come in and BRING the child to detention. I only ever did this three times. Word gets around.

But, even more importantly, I found the Book of Consequences. At the time it was on a website by a ‘Mr Shephard’but it no longer exists. The link above is the nearest thing I could find. I printed out copies for each of the ‘crimes’ and put into a folder that looked something like this.

UPDATE 2017: That site also no longer functions easily. So here’s a link to my Dropbox folder.

As you can see, there is a paragraph they have to copy out and then some questions about what they are on the detention for, why, and what they are going to do to stop the issue in future. 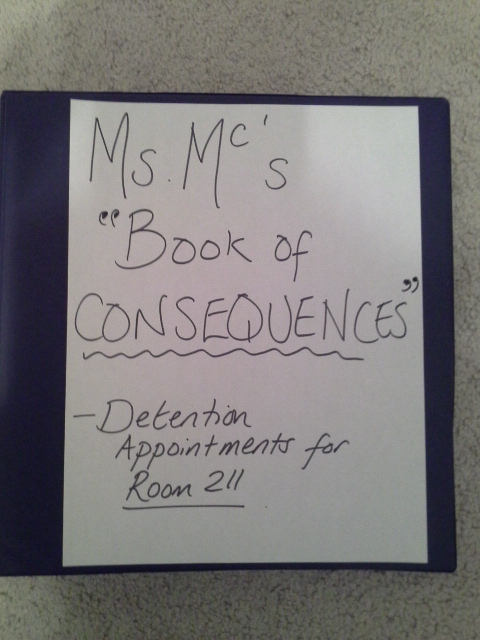 When students came into the detention they were given pen and paper and told the following:

At first the students moaned. “I’m not writing this…” “I didn’t do anything…” “No way…”  I kept repeating “Write down what you have to say, then I’ll look at it, and then you might be able to go”.  Protests would continue a while but after 5 minutes most would fall silent and surrender. Occasionally a student would try to sit it out for the whole detention. If this was becoming the case I would simply point out that they would have to do another detention until it was done. With a flounce and a huff they would inevitably start.  If students started talking to each other when I was reading a response or writing my comments I would stop what I was doing and wait. Not wanting the process to slow down they would soon be quiet and we could continue. No matter how much they tried to draw me on conversation, everything was written down. I didn’t much care for the quality of their handwriting or spelling but the writing things down was crucial in making sure we were all being thoughtful, truthful and in keeping my sanity.

Three amazing (and unexpected) things happened from this process: First, the initial question on the sheet asked pupils to write why they were in detention. I reckon about 60% of kids said something different to the reason why I had put them on detention. Sometimes they even admitted things I hadn’t seen. As someone who prided myself on being a clear communicator I found this disheartening, and was always glad of an opportunity to put students right on the reason for a detention as, in the heat of being told off, it does seem that students stop hearing or we stop explaining clearly – maybe a bit of both.  Secondly, students lied a lot less about what had happened because their words were being put down on paper.  And thirdly, being able to write my views meant students couldn’t ‘switch’ off, and I think they appreciated that I took the time to explain how I felt and what I had seen in the class rather than yelling at them. Especially if things had been quite heated in the lesson, the writing meant we could work more calmly towards a solution for future lessons than I think I (or they) would have done verbally.

The other unexpectedly glorious thing about this system is that you get to keep the papers. I always make pupils sign their papers and agree to what their future solution will be. Being able to get out those papers if there is ever another detention is VERY helpful for parent’s evening or if you have to make referrals. Sometimes they’re also quite funny and being able to share with students as they get older (and better behaved) can be touching as they often balk at their tenacity. As one ex-student wrote when I said he’d verify that I used this system: RT@ahmed_masrur “Yhup, she did! I wrote how I was too clever for the class…then spelt a word wrong”

No doubt there will be some people who disagree with the use of detentions or who – for logistical issues to do with the school – are unable to do detentions. All I can say is that I found them an extraordinarily good way of being able to have a firm and fair sanction that children didn’t like but which did take account of their views (sometimes the letters provided information which enabled me to understand the child better and re-think their detention) and which seemed to genuinely work in helping kids understand the boundaries.  Obviously it didn’t work overnight for everyone, some kids found their way into detentions more than once in a row, some sporadically popped up over the years. But when you hear a kid say “Don’t do that or she’ll make you write from that book thing” then you know that the behaviour work is now being done for you and you can worry almost exclusively about the learning.

After my first year of teaching my behaviour management improved and once I wasn’t scared to give out detentions I perversely found that I needed to give them out a lot less. It’s amazing what confidence in your sanction system does for pupil compliance to your rules. The Book of Consequence was therefore used much less often, though it was not without occasional outings. Thankfully after that first year, the tears stopped for good. 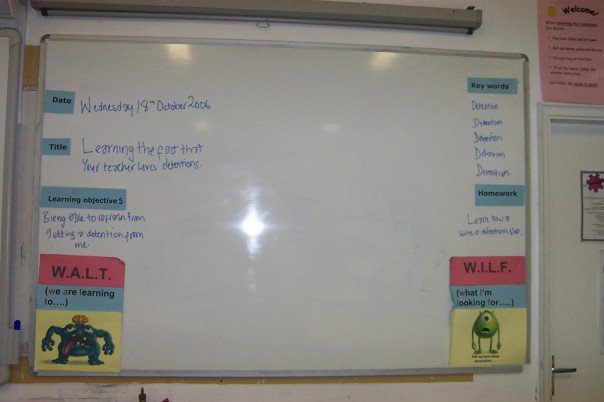